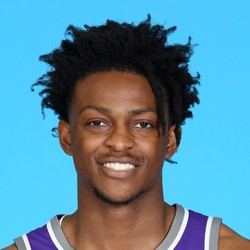 De'Aaron Fox (abdomen) has been ruled out for Thursday’s game against the Thunder.

Fox (abdomen) picked up the injury in Tuesday’s win against the Warriors, and was ultimately ruled out Thursday. Look for Corey Joseph to start and see an expanded role. Fox’s next chance to return will be Friday’s tilt against the Grizzlies.