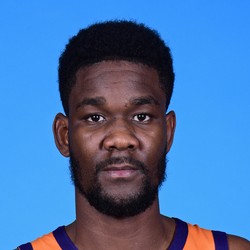 Suns center Deandre Ayton met with the media and shared some of the developments in his game while on hiatus. "Let me tell you about that 3-ball, I'm shooting that 3-ball like it's a middy (mid-range shot). I tell you that. That is a middy shot. Alright?! Other than that, I've been trying to dribble this ball, getting it off the rebound and pushing the tempo."

Considering Ayton only attempted three three-pointers in 30 games this season, this is quite the revelation. There's no question that Ayton has the tools to be a fantasy stud for the foreseeable future - projecting as a potential 20/10 player by averaging 19.0 points and 12 rebounds in his rookie season. Adding a three-point shot will heighten his value going forward and if anything, having the confidence to shoot more than once per 10 games is a great starting point. With him also seemingly 'pushing the tempo' we could see a boost in his assists along with more turnovers. We'll see first-hand if Ayton will incorporate the improvements to his game later this month.