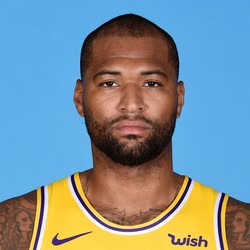 DeMarcus Cousins (knee) hasn’t ruled out signing with a team

C DeMarcus Cousins (knee) has not ruled out signing with a team and playing in Orlando, per his agent Jeff Schwartz.

It was reported that Cousins would focus on rehabbing his torn left ACL and sit out the remainder of the 2019-20 season. He was waived by the Lakers in February and has focused on returning at 100 percent for the 2020-21 campaign. With the conflicted reports, he has not ruled out signing with a franchise and playing in Orlando. If a team does sign Cousins for the remainder of the season, expect the 29-year old to be on a minutes restriction. He averaged 16.2 points, 8.2 rebounds, 3.5 assists, 1.3 steals and 1.4 blocks across 30 games for the Warriors in the 2018-19 season.