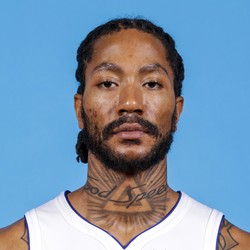 Derrick Rose will miss several weeks after injuring his ankle during Sunday’s loss to Sacramento.

The results of the MRI came back negative, however Rose is still expected to miss multiple weeks, and be re-evaluated at that point in time. Brandon Knight (knee) would be in line for the starting point guard role in Detroit, but he is also banged up. Detroit is extremely thin at the guard position with Rose out, so look for a guy like Derrick Walton Jr. to potentially step up in his absence. Hopefully Bruce Brown Jr. (knee) can return to the court soon and once he does, he should be rostered in most leagues as he was producing in good minutes before he was sidelined. Those with an available IR roster spot will want to hold on to Rose for the next few weeks to see the direction the Pistons decide to go at that point.