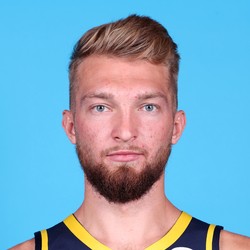 Sabonis has become the focal point of the Indiana offense this year, and he's been putting up some huge statistical lines lately. He's a top-25 guy this year in 9-cat leagues, averaging 18.3 points on 53.9 percent shooting from the field, 12.5 boards, five assists, 0.8 steals, and 0.5 blocks in 34 minutes per game. In the previous two seasons, Sabonis only averaged 24 minutes per game, so it's clear that Indiana has decided he's a cornerstone of this franchise. He's been an absolute steal for fantasy owners, and we foresee him being on a lot of championship rosters at the end of the season.