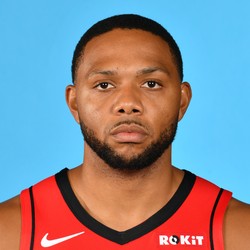 This has been a rough month for Gordon, who has been in and out of the lineup due to soreness in his knee. Struggling and scoreless at halftime, the 12-year vet caught fire during the fourth quarter and his 16 points on the night helped propel the Rockets to victory. His health and inconsistent play as of late are major risks from a fantasy perspective, but Gordon would carry extreme fantasy value in the event of an injury to Russell Westbrook or James Harden. Until then, temper your expectations until he is able to put together some consistent performances. Gordon and the Rockets will look to keep the momentum going into Thursday's showdown against the Lakers.