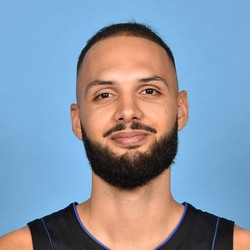 Evan Fournier likely out for an extended period of time

Evan Fournier (elbow) was diagnosed with a UCL sprain in his right elbow after an MRI and likely faces an extended absence, Josh Robbins of The Athletic reports.

The team hasn't provided an official timeline for his return, but coach Steve Clifford said "it could be a little bit" before he retakes the court. Fantasy owners should keep an eye on updates concerning the veteran guard.