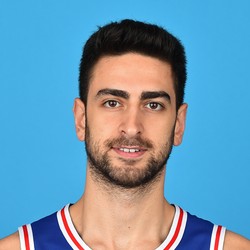 Furkan Korkmaz hangs 17 on the Pistons in Wednesday's win

Korkmaz has scored double figures only twice across five games in March, but has buried at least one three in each contest. He is averaging 9.2 points, 2.4 rebounds, 2.2 assists, 1.0 steals and 2.0 triples during the month. With Ben Simmons to be re-evaluated in three weeks, Korkmaz will see an expanded role once the NBA season resumes play.