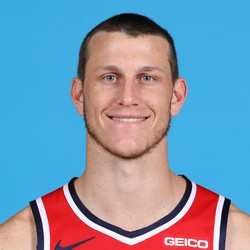 Rookie shooting guard Garrison Mathews left the Wizards' Monday night game against Boston early with an apparent sprained right ankle and did not return. According to Fred Katz of The Athletic, x-rays on Mathews' right ankle came back negative, however, he is expected to miss some time.

The injury is an unfortunate one for both the depth-needy Wizards and for Mathews himself. Mathews has been playing very well as of late, scoring in double-digits in three of the previous four games prior to Monday night's contest. More information should be forthcoming, however, Mathews can be expected to miss at least a few weeks. The Wizards will undoubtedly not have Mathews available when they travel to Orlando to face the Magic on Wednesday.