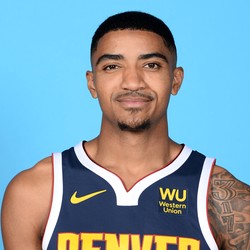 After a mostly lost fantasy season, Harris has played much better since the All-Star break and has particularly turned it on over the past five games. Harris has notched 2+ steals in four consecutive games while knocking down three triples in three of the past five games. Harris has also shot a scorching-hot 64.3% (27-42 FG) from the field and 71.4% (10-14 3PT) from long-distance over that five-game stretch. If Harris was dropped and is still available in your league, grab him now and hope the resurgence continues.