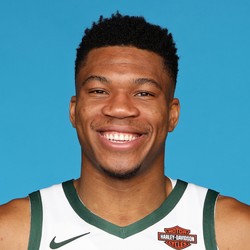 Giannis Antetokounmpo to the Warriors, 'less plausible' than Kevin Durant

Giannis Antetokounmpo's path to the Warriors is far "less plausible" than it was to Kevin Durant.

Antetokounmpo was reportedly being pursued by the Warriors and that the team has been preparing for years to make a bid. In order for the Warriors to have a chance at signing Antetokounmpo, the team would have to shed salary. "Plus (as we’ll get to later), to afford Giannis, the Warriors would have to shed either one or both of Draymond Green and Klay Thompson, along with basically any young asset of value," per Anthony Slater of the Athletic. "Kevin Durant’s $26.5 million contract to fit snugly under the cap restrictions. They’d only need to renounce Harrison Barnes’ rights and trade Andrew Bogut’s $11 million contract over to Dallas." Giannis is once again having a prolific campaign in 2019-2020, averaging 29.6 points, 13.7 rebounds, 5.8 assists, 1.0 steals and 1.0 blocks across 57 games. It will be interesting to see where the 2019 NBA MVP lands next year.