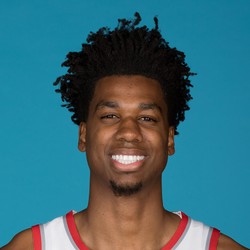 Portland Trail Blazers head coach Terry Stotts said that “in all likelihood” Carmelo Anthony and Jusuf Nurkic will start, which leaves the Power Forward position open. It’s likely the 4 is filled by a healthy Zach Collins, relegating Hassan Whiteside to a bench role.

Whiteside was dominant with Nurkic and Collins sidelined for the majority of the 2019-20 season. In 61 games as the starting center, he averaged 16.3 points on 62 percent shooting, 14.2 rebounds, and 3.1 blocks in 31 minutes per game. With the news that he may come off the bench in addition to Stotts saying that Nurkic and Collins will not be on a minutes limit, temper expectations for Whiteside when the season commences. If his salary in DFS drops enough, he could provide sneaky value with his ability to block shots.