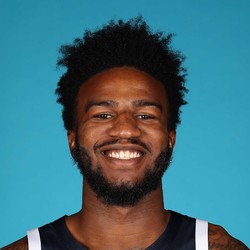 Jordan Bell has been traded to the Memphis Grizzlies in exchange for Bruno Caboclo.

Bell's tenure with Houston lasted a mere day before he was sent to the Grizzlies for the 24 -year-old Caboclo. It's unclear what kind of role the eight-year vet will have with the Rockets, though he is currently dealing with a bone bruise in his left knee and is two weeks in to his 4-to-6 week timetable for recovery. Cabaclo has appeared in 22 games this season for the Grizzlies, averaging two points and two rebounds per game.