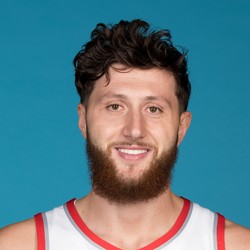 Jusuf Nurkic (leg) told reporters that he will make his season debut on Sunday, March 15 when the Trailblazers take on the Rockets in Portland.

Great news for Nurkic and the Trailblazers! It’s been almost a year since he suffered the gruesome leg injury, and Nurkic and the medical staff feel like he’s ready to return the court. Our assumption is Nurkic will be eased back into the rotation, playing in short bursts of time for the first couple weeks back. He’ll play the backup center position to Hassan Whiteside, who’s had an incredible season, taking full advantage of his opportunity with Nurkic on the sidelines. We wouldn’t rush to grab him at this juncture, but Nurkic is worth keeping an eye on to see if he can play 20+ minutes per game and produce like he’s done in seasons prior.