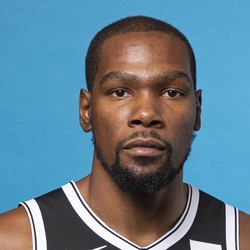 Kevin Durant will not join his teammates in Orlando

Nets star F Kevin Durant officially will not join his teammates in Orlando for the restart of the 2019-20 season, according to league sources.

Durant continues to rehab from the torn Achilles he suffered in 2019. Although he’s been quoted stating he’s 100% healthy, there’s no good reason for him to risk ramping up full basketball activities for the season restart. He’ll be full-go for training camp ahead of the 2020-21 campaign.