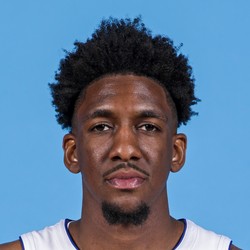 Galloway provided a nice spark off the bench for the Pistons on Wednesday as he was rewarded some extra minutes due to Bruce Brown Jr. (ankle) sitting out. Although he is rather inconsistent with his production, he is typically good for 10 points and two three's per game, though the addition of Jordan McRae has further crowded the shooting guard spot for the Pistons.