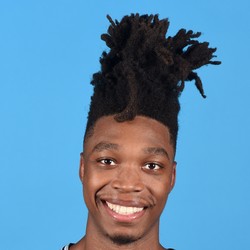 Lonnie Walker IV (shin) is considered questionable for Tuesday's game against the Mavericks as he continues to suffer from a bruised shin.

A bruised shin ultimately held the second-year pro out of Sunday's game against Cleveland, though the short-handed Spurs will wait to see how he feels tomorrow before making an official decision. If he is indeed cleared to play, he could be looking at a boost in playing time going forward due to Dejounte Murray (calf) being ruled out until further notice.