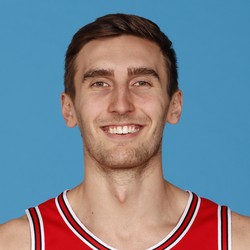 In the wake of injuries to Wendell Carter Jr. and Daniel Gafford the Bulls have been forced to dig deep into the bench and Kornet got his 13th consecutive start. In Tuesday's matchup, the Wizards were crushing the Bulls on the glass so coach Jim Boylen turned to the big-bodied Cristiano Felicio in an attempt to clog up the paint. Over the 13-game opportunity as a starter the Kornet has only hit the 20-point mark once and the 7'2" center failed to record double-digit rebounds in a single contest. Gafford was listed as probably for Tuesday's matchup and although he was unable to suit up, he should be back in the lineup as the team's starter for Thursday's matchup against the Hornets and Kornet's relevance in fantasy will be completely extinguished.