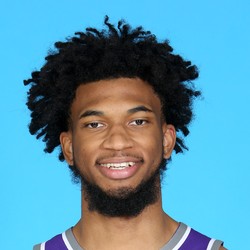 Coach Luke Walton showed a lot of optimism towards the Kings' future in a new interview. In regards to the Marvin Bagley III's health concerns, Walton said he recently spoke with him and was told that "he feels much better," but would not comment on his availability if the season were to resume.

After being selected second overall in the 2018 draft, Bagley has struggled to stay healthy, missing 20 games his rookie season and only suiting up for 13 in 2019-2020 after suffering multiple lower body injuries. Meant to be part of a three-headed monster with teammates De'Aaron Fox and Buddy Hield, Bagley's injuries have kept the team from reaching their potential as they sit at 28-36. Playing in a limited fashion in some of his appearances last season, Bagley saw a dropoff in production in every statistic from his rookie campaign. In 2019-2020 he averaged 14.2 points, 7.5 rebounds, 0.9 blocks, 0.8 assists, and 0.5 steals. Walton expressed a lot of optimism for the Kings' future, noting lineup changes that helped them to improve their record. It seemed obvious that Bagley's future was an integral part of the Kings' success but Richaun Holmes was able to fill his shoes when healthy. As of now the coach would not comment on the availability of Bagley if the season were to resume, saying that still has a set of protocol to overcome before being able to play. It's safe to assume that we won't see him until the 2020-2021 season. While Bagley's ceiling still holds some value in dynasty leagues, it doesn't seem like he'll do much if the season comes back this year.