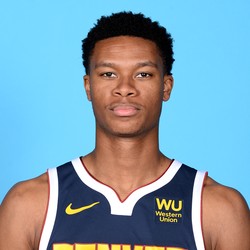 P.J. Dozier signing a full NBA contract with the Nuggets

It’s a multi-year deal for Dozier who has been a two-way player for the Nuggets over the past year. He’s also been in and out of the NBA G League, but now he gets his opportunity for multiple years with the Nuggets. He could be a nice rotational piece for a Denver team that runs 8-9 deep at any given time. Dozier has only played a total of 29 games in the NBA after going undrafted out of South Carolina.