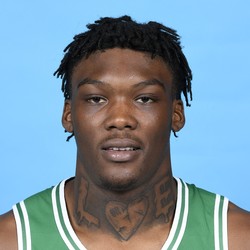 Robert Williams III (back strain) listed as probable for Tuesday

The Boston Celtics on Twitter have listed Robert Williams III as probable for Tuesday’s game with the Pacers due to a lower back strain.

Williams injured his lower back in Sunday’s contest with the Thunder. Williams can be left on waiver wires as he is getting minimal playing time for now. Williams would need injuries to Daniel Theis and Enes Kanter to become relevant.