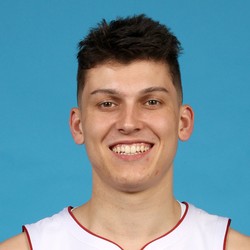 Tyler Herro says he grew up during the four-month suspension

Tyler Herro credits the four-month break saying, “I definitely feel like I grew up a little more as far as knowing the game…I took a lot from [the break], namely being able to watch more film. I’m excited to get back out there.”

He also touched on how the break allowed him to fully recover from an ankle injury he sustained in February, “I definitely do feel back to myself, [the break] definitely definitely helped just so I had time to recover. I feel 100 percent again.” Herro is a part of a young group of Heat players who will be relying on throughout playoffs. Before suffering his ankle injury earlier this year, he was well on pace for an All-Rookie first-team season. Through his impressive play, Herro has been able to carve out a role in the team’s rotation. This season he has averaged 27.2 minutes of playing time, 12.9 points, 4.0 rebounds, and 1.9 assists per game. We will have to wait and see just how much his growth has translated into an improved game, Herro could be worth keeping your radar for sneaky value and should be added to rosters in deep-league play.