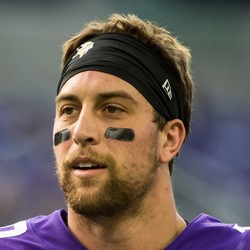 Adam Thielen caught five of seven targets for 50 yards in the Vikings’ 27-10 loss to the 49ers on Saturday.

Thielen finished second only to Stefon Diggs (57) in receiving yards Saturday, while leading the Vikings in targets. It was a let-down effort considering Thielen's big game in the Wild Card win over the Saints, but Minnesota was shut down all afternoon by a stout San Francisco defense. A WR1 in 2018, Thielen will look to put a forgettable, injury-riddled 2019 campaign behind him and bounce back in 2020.

Adam Thielen (ankle) is listed as active for Saturday’s Divisional Round playoff matchup against the 49ers.

After going through pregame warmups, Thielen tested his ankle and is all systems go for Saturday’s playoff contest against the 49ers. He suffered a laceration in his left ankle (which required stitches) in Wednesday’s practice, but it will not prevent him from playing Saturday. Thielen caught seven passes for 129 yards against the Saints in the Wild Card round. There has been no report of Thielen being limited, he should play his usual role as one of Kirk Cousin’s top targets.

Adam Thielen (ankle) was a limited participant in Wednesday's practice.

Thielen reportedly sustained the injury mid-practice. As of now it doesn't seem to be anything to worry too much about. We should hear more from coach Mike Zimmer on Thursday.

Adam Thielen corralled seven of nine targets for 129 yards in the Vikings’ 26-20 overtime victory over the Saints on Sunday.

His longest play of the game came on a 43-yarder in overtime that brought Minnesota down to the goal-line and set up the game-winning touchdown pass to Kyle Rudolph. After an injury-plagued campaign, highlighted by some poor showings, No. 19 looked to be back in form Sunday and will try to carry that momentum into the Divisional Round next week.

Vikings wide receiver Adam Thielen could be held out of the team's Week 17 matchup against the Chicago Bears in order to rest his ailing hamstring, according to the team's official website.

With the Vikings already having their playoff spot locked in place, they have no real incentive to play their starters. That means that an ailing Thielen, who has struggled to return from an ailing hamstring for several weeks, is likely to watch Week 17 from the sidelines. Fantasy owners should monitor his status heading into the weekend but have a clear backup plan in place in the event that he is held out.

Mike Maher - The Birds Blitz28 weeks ago
Who Should I Draft?
Most Accurate Experts
for Adam Thielen
Do Not Sell
Are you looking to contact Customer Support about a subscription or account related question?
Yes
No, I'm a California resident looking for the California Consumer Privacy Act form