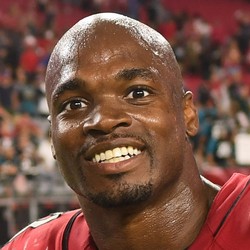 When asked about his playing future in the NFL, Redskins RB Adrian Peterson told TMZ Sports, “man, why not four more years? Why not?!”

The future hall of famer will be 39 years in 2023, but doesn’t want to regret any decision he makes when he hangs up his cleats for a final time. He told TMZ Sports, "I don't want to ever be in a position where I look back and say, 'Man, I should have played two more years. I should of played another year.’ I want to enjoy it." Peterson is 4,000 yards away from Emmitt Smith’s all-time rushing record, but it seems unlikely he’ll touch that even with four more playing years. His best years are certainly behind him at this point, but Peterson can still be a contributor shouldering 10-12 carries per game with other pieces in the backfield. He’ll split time with Derrius Guice in 2020. Guice himself will look to overcome injuries that have plagued his two-year NFL career.

Redskins offensive coordinator Scott Turner says "there's a role" for the type of back Adrian Peterson is.

In terms of the passing game Turner added that AP could be used in checkdown situations or for play action. However, Peterson has just 49 targets over the past two seasons combined. Derrius Guice, Antonio Gibson, and J.D. McKissic will all see time in this committee as well.

Peterson, who will turn 35 this off-season, will be back in Washington next year. The former MVP led the team in rushing last season but will likely be a backup to Derrius Guice in 2020. Washington coach Ron Rivera made a point to say Peterson's leadership is vital to the organization right now.

Washington running back Adrian Peterson rushed 13 times for 78 yards and caught one pass for no yardage in Sunday's loss to the Dallas Cowboys.

Peterson finishes the year with 898 yards rushing on 211 attempts with five touchdowns. He lost his starting gig to second-year back Derrius Guice twice, but he regained the job both times due to Guice's inability to stay on the field. With a new coaching staff and front office changes coming in Washington, it is not clear if Peterson will be back for another season.

Washington running back Adrian Peterson rushed 15 times for 36 yards and a touchdown in Sunday's loss to the New York Giants. He added two catches for 19 yards.

Peterson was mostly bottled up on Sunday, but he salvaged his day from a fantasy perspective by adding a short touchdown run. He has now scored a touchdown in four straight games despite not rushing for 100 yards since Week 9.

Mike Maher - The Birds Blitz29 weeks ago
Who Should I Draft?
Most Accurate Experts
for Adrian Peterson
Do Not Sell
Are you looking to contact Customer Support about a subscription or account related question?
Yes
No, I'm a California resident looking for the California Consumer Privacy Act form