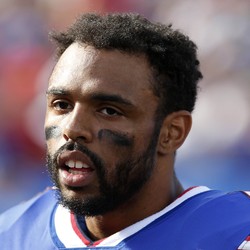 Andre Holmes was claimed off waivers after being released by the Bills.

Holmes will provide some depth at WR to a team that lost Demaryius Thomas to a mid-season trade and more recently Emmanual Sanders to injury. Holmes isn't likely to provide fantasy relevance this year.

Blaine Blontz1 year ago
Andre Holmes released by the Bills

Holmes, 30, was cut by the Bills on Tuesday along with Kelvin Benjamin. He's only accrued a 12/157/0 stat line in 12 games this season and was likely released to get Buffalo's younger players increased snaps. Holmes is subject to waivers.

Andre Holmes caught both of his targets for 45 yards in the Bills' Week 8 loss to the Patriots.

Holmes got involved in this game with a few decent catches, but he's still the WR3 on the team, and a team which boasts an anemic passing offense at that, so don't do anything with him at this point.

Andre Holmes caught one of his two targets Sunday against the Texans for 20 yards.

Holmes and the Bills' WRs will remain irrelevant for fantasy purposes until they have a capable QB under center. The injury to Josh Allen and incompetence of Nathan Peterman will only extend the offense's futility.

Andre Holmes saw four targets, catching three of them for 29 yards, in the Bills' Week 3 win over the Vikings.

The Bills WRs across the board have been unreliable at best, and Holmes is third among them, behind Kelvin Benjamin and Zay Jones. Holmes should be on waivers, even in deep leagues.