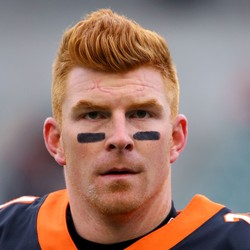 It was announced on Saturday that Dalton agreed to a one-year base value deal with the Cowboys. The contract is now official. Dalton will now backup star QB Dak Prescott. He threw for 3,494 yards with a 16:14 TD:INT across 13 games for the Bengals last season. The 32-year-old QB is mainly a handcuff to Prescott and is worth drafting in Two-Quarterback/Superflex league formats.

Andy Dalton is signing a one-year, $3 million base value deal with the Cowboys. The contract is worth up to $7 million in incentives.

Dalton was recently cut by the Bengals on Thursday. He was rumored to sign with the Jaguars and Jets, but ended up settling on a one-year deal with the Cowboys. Dalton will now backup star QB Dak Prescott. He threw for 3,494 yards with a 16:14 TD:INT across 13 games for the Bengals last season. The 32-year-old QB is mainly a handcuff to Prescott and is worth drafting in Two-Quarterback/Superflex league formats.

According to sources, the New York Jets are conducting due diligence on former Bengals QB Andy Dalton, who became a free agent just two days ago after being released by Cincinnati.

The Jets are reported to have at least some level of interest in Dalton, who could provide New York with a highly-capable backup to starter Sam Darnold. The only other QB on the roster with any other experience is David Fales, who has only attempted 48 passes since being drafted in the sixth-round of the 2014 NFL Draft. Add the Jets to the list of teams reportedly interested in Dalton, which also includes the Jaguars and the Patriots.

According to NFL Network, the Jacksonville Jaguars have interest in former Bengals QB Andy Dalton.

Between trading Nick Foles to the Bears and not taking a quarterback in this year’s Draft until round six (Jake Luton), Jacksonville looked set on heading into the season with Gardner Minshew II as their starting quarterback. Not so fast, reports have surfaced that the Jaguars are interested in the nine-year vet. Before rumors of Dalton in Jacksonville made headway, many believed he would be a good fit in New England with Bill Belichick. Now it looks like Dalton is being eyed by both the Jaguars and the Patriots. Stay tuned for further updates on the Andy Dalton front as they unfold, but he should be employed sooner rather than later.

QB Andy Dalton has been released by the Cincinnati Bengals, and $17.7M comes off the team’s 2020 salary cap.

It’s officially the beginning of the Joe Burrow-era in Cincinnati as the team has released long-time QB Andy Dalton. A 2011 second-round pick out of TCU, Dalton has played all nine seasons with the Bengals, totaling 4,449 yards, 204 TDs, and 118 INTs. He joins Cam Newton and Joe Flacco as other veteran quarterbacks on the free agent market.

Deposit $10 at a DFS partner site you have NOT played at and get a FREE 6 Month HOF Subscription!
Claim Offer
Who Should I Draft?
Most Accurate Experts
for Andy Dalton
Consensus Rankings
View All Rankings
Do Not Sell
Are you looking to contact Customer Support about a subscription or account related question?
Yes
No, I'm a California resident looking for the California Consumer Privacy Act form