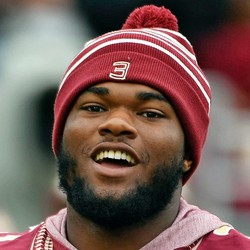 Lindsey Thiry of ESPN writes the Rams plan to utilize all three of their running backs this season.

"We feel we've got three really good backs," said Rams coach Sean McVay. "What does that mean in terms of the distribution of carries? I think that's to be determined based on how things play themselves out and when we get a chance to actually compete in practice and in those live opportunities." Darrell Henderson, the team's third-round selection in 2019, was a fantasy darling last off-season before barely seeing the field in the regular season. Veteran Malcolm Brown is still in the mix. Additionally, the Rams drafted Cam Akers in this second round in this year's draft. Moving forward Los Angeles figures to shift to more of a RBBC approach rather than the workhorse model they had with Todd Gurley. It is always possible one of these backs (likely Akers) emerges as the lead guy, but for now this is a tough backfield to project.

Brendan Tuma - Too Much Tuma1 week ago
Cam Akers selected No. 52 by Los Angeles Rams

The Los Angeles Rams have selected running back Cam Akers with the No. 52 overall pick in the 2020 NFL Draft.

The Rams find their replacement for Todd Gurley by selecting the 5’10” 217 lb. running back out of Florida State. Akers has the unique combination of both power and speed and runs with good pad level. A gifted athlete who is only the third running back in Florida State history to have multiple 1000-yard rushing seasons (the other two were Warrick Dunn and Dalvin Cook). He’ll have an immediate impact in Los Angeles with an opportunity to compete for a starting job right out of the gate.

Cam Akers needed to show up to the NFL Combine and display his athleticism. For everything that Akers struggles with on the field, his athleticism can bail him out in several spots. Akers ran extremely well in the 40-yard dash (4.47), showed off his lower body explosiveness with 35.5 inches in the vertical jump, and looked extremely fluid in the footwork drills at the Combine. There were some RBs in Indianapolis that saw their stock drop dramatically, but Akers left with the arrow pointing up on his Dynasty stock. He now solidifies himself as a first round Dynasty rookie draft selection and should see a NFL team give him a significant workload right out of the gates in 2020.