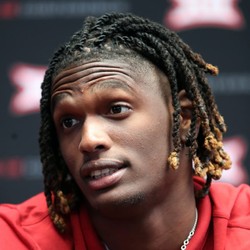 The Dallas Cowboys have selected wide receiver CeeDee Lamb with the No. 17 overall pick in the 2020 NFL Draft.

Somehow, some way, the Dallas Cowboys had a receiver they discussed trading up for fall in their laps. Despite much bigger needs at other positions, CeeDee Lamb proved too tempting to pass up at 17th overall. The Dallas Cowboys now have one of the deadliest wide receiver trios in the entire NFL. Dallas is not the ideal spot for his immediate fantasy value, and he may be more of a WR3/4 option as a rookie.

This isn't a huge surprise as the Raiders appear likely to take a receiver with the 12th overall pick this week. King adds that coach Jon Gruden might prefer Henry Ruggs, who can take the top off a defense, but Lamb has all the making of a future number one wideout. Jerry Jeudy could be an option for Las Vegas as well.

Brendan Tuma - Too Much Tuma5 weeks ago
CeeDee Lamb meets with 49ers, who hold the 13th pick in the upcoming Draft

The 49ers hold the 13th and 31st picks in the first round of the 2020 NFL Draft. With the departure of WR Emmanuel Sanders, it’s highly likely they’ll lean receiver in the first round of the draft, especially given their position at pick number 13. They may even have their choice between what most are calling the big three of Lamb, Jerry Jeudy, and Henry Ruggs III depending on how the draft shakes out, but it’s at least notable that San Francisco met with Lamb recently.

CeeDee Lamb was considered a top-tier prospect coming into the NFL Combine, but had questions surrounding his true long speed. While there are several plays on tape of him breaking plays off for huge runs, there's often poor tackling attempts from the defense on all of them. Lamb answered all those questions and shut up the critics in a big way on Thursday. People were projecting Lamb to run around a 4.60-4.65, but instead he came out and ran a 4.5 40-yard dash. This is on the heels too of coming in heavier than his listed weight at Oklahoma. Lamb's a top-tier WR prospect in this class and could be chosen over Jerry Jeudy in your Dynasty rookie drafts.

Kyle Yates13 weeks ago
CeeDee Lamb weighs in at 198 pounds

At the measurements portion of the 2020 NFL Combine, CeeDee Lamb weighed in at 198 pounds.

Lamb was listed by Oklahoma at 189, so this is a bit of a jump from what we expected to see. One of the "knocks" on Lamb was his size and whether or not he was going to be able to have the durability to withstand NFL competition versus what he saw in the Big-12. Lamb weighing in at 198 is more than enough, but the question now becomes whether or not he can maintain his explosiveness at that weight. All eyes will be on him in the 40-yard dash.