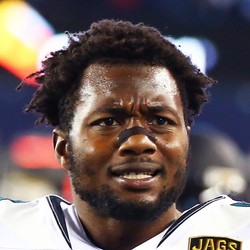 Free agent linebacker Dante Fowler Jr. is expected to sign with the Falcons.

2015's third overall pick will see his third team in his fifth season. He is coming off a monster season for the Rams were he finished second in sacks to Aaron Donald, with 11.5. He added two forced fumbles with one recovery and a touchdown as well as six defended passes. No longer sharing pass-rushing duties with Donald and Clay Matthews, Fowler Jr. will become the primary pass-rusher for the Falcons after they lost Vic Beasley in free agency. Expect to see a slight drop in production as he will be the focal point for the opponent's offensive line.

Fowler Jr. is second on the team in total tackles with 11.5 through Week 16. He also has 56 total tackles and two forced fumbles during that same time period. He should be started in deeper IDP leagues only.

Dante Fowler Jr. finished Sunday’s loss to the Steelers with two total tackles, a fumble recovery, and a touchdown.

Fowler Jr. has 34 total tackles, 6.5 sacks, and a forced fumble through Week 10. He can be kept on waivers in most IDP leagues.

Andrew Liang21 weeks ago
Dante Fowler Jr. gets to Andy Dalton on Sunday

Fowler is leading all Rams in sacks with 6.5 through Week 8. He should be started in deeper IDP leagues.

Fowler, as dominant as he was, should be left on waivers in most formats. His performance was a byproduct of a bad Atlanta Falcons team. He does have 28 total tackles and five sacks through Week 7.