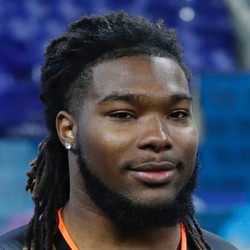 Los Angeles Rams running back Darrell Henderson has been placed on injured reserve with an ankle injury.

Henderson is a promising talent that was only expected to get his chance to shine if Todd Gurley's knee issues proved to be as bad as some thought in the offseason. Henderson's rookie season ends with just 43 touches. He remains a hold in dynasty leagues, but his stock has taken a hit with Gurley once again deemed healthy enough to operate in a feature back role. The Rams were always one of the few teams Henderson was likely to end up buried on the depth chart as a rookie.

Darrell Henderson rushed twice for seven yards in the Rams' Week 16 loss to the 49ers.

Henderson remains a dynasty stash and nothing more at this point. The rookie has simply failed to see much action this season.

Darrell Henderson rushed four times for 17 yards in the Rams' 34-7 Week 13 win over the Cardinals.

Darrell Henderson rushed four times for four yards as the Rams fell to the Steelers in Week 10.

Henderson had seen a combined 25 targets in the two games prior to this one. However, that was with Malcolm Brown out. It appears as if Brown's return will kill any fantasy value Henderson had. Still, the rookie remains a high-upside handcuff for deeper leagues.

Darrell Henderson rushed 11 times for 49 yards and caught two passes for 20 yards in the Rams' 24-10 Week 8 win over the Bengals.

Henderson wound up out-touching Todd Gurley 13-10, but it was Gurley who found the end zone. Henderson has now seen a combined 25 touches over the past two weeks with Malcolm Brown injured. The rookie running back would need an injury to Gurley to become anything more than a FLEX play, however. The Rams are on a bye next week.