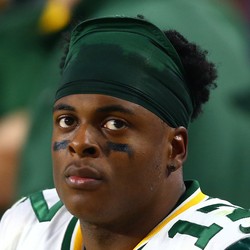 Davante Adams hauled in eight of 11 targets for 160 yards and two touchdowns in the Packers’ 28-23 win over the Seahawks on Sunday.

Adams accounted for nearly two-thirds of Green Bay's receiving yards, as he had a monster performance in Sunday's win. He's been the true apple of Aaron Rodgers' eye all season, and things aren't expected to change next Sunday when the Packers face the 49ers with a trip to the Super Bowl on the line.

Davante Adams brought in seven of 13 targets for 93 yards and a touchdown in the Packers’ 23-20 win over the Lions on Sunday.

Adams paced Green Bay in receiving yet again with another dominant effort. He ends the year with an 83/997/5 receiving line in just 12 games. He fails to top 1,000 yards in consecutive seasons and snaps a three-year streak of scoring double-digit touchdowns.

Davante Adams corralled seven of 13 targets for 103 yards and a TD in the Packers’ 21-13 win over the Bears on Sunday.

Adams bounced back from a dud against Washington in Week 14, racking up a 100-yard effort and crossing the goal line in Sunday's win. Adams is by far the No. 1 receiver in Green Bay's offense, seeing double-digit targets in six of his last seven games. He'll be a locked-in WR1 for Week 16's matchup with Minnesota.

Adams is going to have rough outings when Aaron Rodgers has only 18 completions. He saw a healthy enough six targets on the afternoon, but based on where he was drafted this season, this stat line could have sank fantasy team's hopes of advancing to the next round. He continues to be the obvious leader in team wide receiver snaps, but running back Aaron Jones saw more targets with seven. Adams could be in for another tough week against a Chicago Bears team that held him to four receptions and 36 yards off eight Week 1 targets. Due to a lower floor than anyone thought possible from one of 2018’s most impressive receivers, Adams appears to be more WR2 than WR1 for this weekend's contest against the Bears.

Deposit $10 at a DFS partner site you have NOT played at and get a FREE 6 Month HOF Subscription!
Claim Offer
Who Should I Start?
Most Accurate Experts
for Davante Adams
Consensus Rankings
View all Flex Rankings