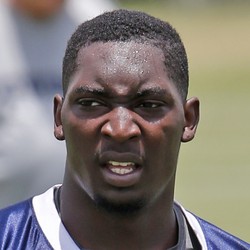 NFL Media’s Mike Garafolo reported Monday that Cowboys defensive end DeMarcus Lawrence was expected to be activated off the physically unable to perform list “soon.” As it turns out, “soon” is just one day later as the star pass-rusher was activated Tuesday.

Lawrence participated in individual drills during Tuesday’s practice. It was his first practice participation of the summer after undergoing offseason shoulder surgery. Lawrence signed a five-year, $105 million contract extension in April. The deal includes $65 million in guaranteed money and makes him the highest paid non-quarterback with $31.1 million for the 2019 season. He has recorded 25 sacks over the last two seasons.

NFL Media’s Ian Rapoport reported Friday evening that the Cowboys and star pass-rusher DeMarcus Lawrence have agreed “on basic parameters” of a five-year, $105 million contract extension. The deal includes $65 million in guaranteed money and will make Lawrence the highest paid non-quarterback with $31.1 million for the 2019 season.

The Cowboys used the franchise tag on Lawrence for the second consecutive year. However, the star defensive end had no intention of playing under the $20.5 million tag again. He has waited on surgery to repair a shoulder injury until the new deal was finished. Lawrence has been one of the most dominant pass-rushers in the league over the last two seasons with 25 total sacks and 67 QB hits in 32 games. Now he has a brand new deal to show for it.

Lawrence was a force yet again, although he didn't record any sacks. There aren't many safer weekly starts than Lawrence in IDP.

Demarcus Lawrence was limited in practice on Wednesday with a shoulder injury, but practiced in full on Thursday.

Lawrence should be good to go for Sunday. He's a locked-and-loaded DE1 every week.

Cowboys defensive end DeMarcus Lawrence had just one tackle and no sacks in Sunday's 40-7 destruction of the Jacksonville Jaguars.

Lawrence did not get the start and seemed to be on a pitch count as he continues to play through a shoulder injury. He remains an elite DE option, though, when the Cowboys take on the Redskins in Week 7.