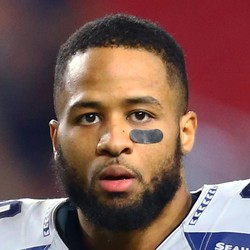 Despite getting bumped from the playoffs at the hands of the Titans, Earl Thomas still had a solid outing with six solo tackles, one assisted tackle, one TFL, one sack, and one QB hit.

The Ravens had a disappointing finish to their magical season, but Thomas did everything he could to prevent that outcome. He even notched the only sack against Ryan Tannehill, bringing his season total to three. Thomas had a successful season anchoring the secondary for the Ravens and will look to build more chemistry with his fellow DBs next season.

Earl Thomas logged six solo tackles, one assisted tackle, one TFL, one sack, one QB hit, and one forced fumble in a close 24-17 win over the Bills.

Though Thomas technically recorded half a sack last week against the 49ers, he got his first individual sack today on Josh Allen. He did manage to strip Allen of the ball, but perhaps he was a bit overzealous in his efforts, as he was immediately called for a roughing penalty. Despite his illustrious career, Thomas had never recorded a sack in his time with Seattle. He's still not worth a roster spot though.

Adam Schefter of ESPN reports Earl Thomas and the Baltimore Ravens have agreed to a four-year contract worth a total of $55 million.

The deal includes $32 million in guaranteed money. Thomas is coming off a major leg injury and was reportedly only seeking a two-year deal worth $30 million, but this is obviously much more than that. The 29-year-old safety will be an upgrade to an already great Baltimore defense.

Thomas is done for the year, and it will almost certainly be in his last game in a Seahawks uniform. Tedric Thompson is next man up as Thomas' replacement.

Although Thomas didn't practice on Friday due to "non-football-related issues," the elite ball-hawking safety participated in Saturday's walkthrough and is expected to be on the field for Sunday's matchup against the Cowboys. Rumored to be traded to Dallas since the last time these two teams met in regular season play in December 2017, Thomas will remain a member of the Seahawks, for now. If Thomas is indeed active, he should play a tremendous role for the Seahawks' rebuilding the defense in containing a Cowboys offense that decided to show up in Week 2's win over the Giants.