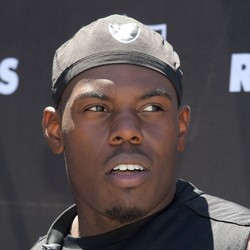 Jalen Richard has signed a two-year, $7 million extension to remain with the Raiders.

The deal includes $4.6 million in guaranteed money. Richard was going to be an unrestricted free agent before this signing but will remain with the team to move to Las Vegas. A strict passing-down back, this hurts Josh Jacobs' fantasy value more than anything else.

Jalen Richard rushed three times for 20 yards and caught both of his targets for 39 yards in the Raiders' 16-15 loss to the Broncos Sunday.

Richard was productive on a low number of touches Sunday. He enters next season as a desperation option in PPR formats.

Jalen Richard rushed five times for 11 yards and had four receptions for 18 yards in the Raiders' 24-17 win over the Chargers Sunday. He was targeted four times.

Richard played behind DeAndre Washington with Josh Jacobs (shoulder) out Sunday. He didn't manage much expect some cheap PPR points.

Jalen Richard rushed once for 11 yards and had two receptions for 25 yards in the Raiders' 20-16 loss to the Jaguars Sunday. He was targeted three times.

Richard is seeing too limited a workload to lean on in the fantasy finals with Josh Jacobs and DeAndre Washington getting the majority of the touches.

Jalen Richard rushed seven times for 28 yards and had two catches for 18 yards in the Raiders' 42-21 loss to the Titans Sunday. He was targeted three times.

Richard is seeing touches but has limited fantasy appeal for the playoffs.

Deposit $10 at a DFS partner site you have NOT played at and get a FREE 6 Month HOF Subscription!
Claim Offer
Who Should I Draft?
Most Accurate Experts
for Jalen Richard
Consensus Rankings
View All Rankings
Do Not Sell
Are you looking to contact Customer Support about a subscription or account related question?
Yes
No, I'm a California resident looking for the California Consumer Privacy Act form