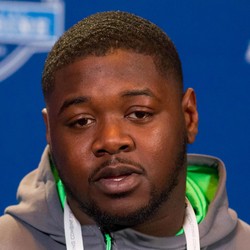 Jarran Reed ended Monday’s win over San Francisco with four total tackles, 1.5 sacks, and a forced fumble. In the second quarter, Reed sacked Jimmy Garoppolo, he fumbles the ball, and Jadeveon Clowney picks it up and runs for six.

Reed came up big for the Seahawks on Monday night. He currently has 12 total tackles, 1.5 sacks, and a forced fumble since Week 7. He can be left on waivers in most leagues.

Seahawks defensive tackle Jarran Reed has been suspended for the first six games of the NFL season for violating the league's personal conduct policy.

The suspension stems from a 2017 incident in which Reed was neither arrested nor charged. His absence will be a big blow to Seattle's defense after a monster 2018 season in which he recorded career highs in sacks (10.5), combined tackles (50), solo tackles (37), tackles for loss (12), and fumble recoveries (2). Reed finished second on the team in sacks behind only Frank Clark. Seattle faces, among others, the Rams, Steelers, Saints and Browns in the first six weeks of 2019.

DT Jarran Reed recorded five solo tackles, one tackle for loss, one sack, and recovered one fumble in the Seattle Seahawks' Week 6 victory over the Oakland Raiders.

Reed, the 14th-ranked defensive lineman to this point, played well yet again. He is a solid producer, and doesn't show any signs of slowing down.

Reed made plenty of plays, but was particularly effective in the run game. He forced a fumble, but officials ruled the runner down by contact and Seattle head coach Pete Carroll didn't throw the challenge flag in time. Reed looks like a cornerstone for a rebuilding defense in the Pacific Northwest.

The Seattle Seahawks and DT Jarran Reed agreed to terms on his rookie deal on Thursday.

Jarran Reed was selected in the second-round of the NFL Draft and is touted as a steal by being selected at that spot. Reed will likely be heavily used in Seattle's defensive line rotation or compete with Ahtyba Rubin for the starting job.