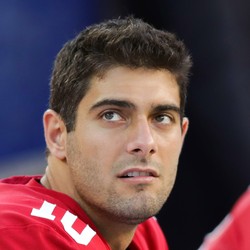 Jimmy Garoppolo completed 20-of-31 passes for 219 yards, one touchdown, and two interceptions as the 49ers fell to the Chiefs in Super Bowl 54.

The 49ers had a 20-10 lead before allowing 21 unanswered points to lose the game. Garoppolo wasn't asked to do much until San Francisco was trailing in the fourth quarter and he wasn't able to deliver. The 28-year-old showed plenty of flashes this season, particularly his comeback win over the Saints late in the regular season. With the 49ers' run game likely due for some natural regression it'll be on Garoppolo to take another step forward in 2020.

Jimmy Garoppolo completed 6-of-8 passes for 77 yards in the 49ers' 37-20 NFC Championship victory over the Packers.

The 49ers once again imposed their will via the running game. Raheem Mostert compiled 220 rushing yards and scored four times. That didn't leave a lot of opportunity for Jimmy G and the passing game. Expect San Francisco to use a similar strategy against the Chiefs in Super Bowl 54.

Jimmy Garoppolo completed 11-of-19 passes for 131 yards, one touchdown, and one interception in the 49ers' 27-10 Divisional Round win over the Vikings.

Garoppolo wasn't at his best but he didn't need to be. San Francisco's defense was easily able to dominate Minnesota's offense, which consistently gave the 49ers advantageous field position. The team will now play the winner of Seahawks/Packers in the NFC Championship next weekend.

The 49ers clinched a first-round bye with the victory. Garoppolo didn't throw any TDs but was able to connect on some deep shots in the passing game when needed. He finishes the year with a 27/13 TD/INT ratio.

Garoppolo was shaky for most of the game but made several clutch plays late. His touchdown pass went to George Kittle and he later found Emmanuel Sanders to set up Robbie Gould's game-winning field goal. He'll remain a QB2 in fantasy in Week 17 against the Seahawks.

Deposit $10 at a DFS partner site you have NOT played at and get a FREE 6 Month HOF Subscription!
Claim Offer
Who Should I Start?
Most Accurate Experts
for Jimmy Garoppolo
Consensus Rankings
View All Rankings