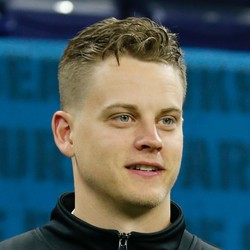 The Cincinnati Bengals have selected quarterback Joe Burrow with the No. 1 overall pick in the 2020 NFL Draft.

This was never in doubt. Burrow, coming off arguably the greatest college football season of all time, has been meeting weekly with the Bengals since mid-March. The 23-year-old LSU product is a little bit older than most elite quarterback prospects, but his 2019 production is impossible to argue with. Burrow led his team to a 15-0 record and a national championship, tossing 60 touchdown passes (!!) against just six interceptions. Mike Renner of Pro Football Focus described him as “easily the most accurate college QB we’ve ever scouted”. The 6’4”, 221-pound specimen walks into an underrated offensive environment in Cincinnati. Led by Sean McVay disciple Zac Taylor, Burrow will be surrounded by fellow playmakers A.J. Green, Tyler Boyd, and Joe Mixon. He could wind up flirting with low-end QB1 fantasy numbers as a rookie this year.

LSU QB Joe Burrow was officially welcomed to Cincinnati on Wednesday night by Bengals President Mike Brown, one night ahead of the NFL Draft.

It’s everything but a done deal for Burrow and the Bengals at this point, as Cincinnati told the LSU QB officially by letter that he is their guy. In his letter, Brown told Burrow that he “looks forward to building championship football teams with you for many years to come.” With all the offensive weapons to work with in Cincinnati, look for Burrow to flirt with top-15 QB production right out of the gate this season.

Adam Koffler5 weeks ago
Joe Burrow has reportedly been told by the Bengals he will be No. 1 pick

Per source, LSU QB Joe Burrow has been informed by the Cincinnati Bengals that he will in fact be their No. 1 overall selection on Thursday night.

It’s been widely known for a while now that Burrow would most likely be the No. 1 overall pick of the Bengals, and reports are now saying that the team has informed him of their intent to make it official on Thursday night of the NFL Draft.

Ian Rapoport of NFL Network reports the Bengals have met weekly with Joe Burrow since mid-March.

The meetings have all lasted for three hours, which is the maximum amount of time a prospect can meet with an NFL team for right now. All indications continue to point to the Bengals selecting Burrow with the first overall pick next week. Since this won't be a normal off-season it makes sense for Cincinnati to already start talking X's and O's with their future franchise quarterback.

Ian Rapoport of NFL Network reports he has "not talked to one team that doesn’t have LSU’s Joe Burrow No. 1 overall".

This isn't breaking news by any means, but it confirms that Burrow is considered the top quarterback prospect not by the Bengals but by everyone. There's zero reason to expect that the reigning Heisman Trophy winner won't have his name called first overall on April 23rd.