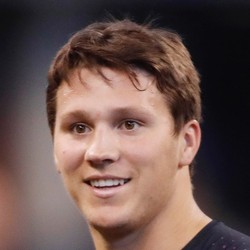 Josh Allen completed 24-of-46 pass attempts for 264 yards in the Bills' Wild Card loss to the Texans. Allen rushed nine times for 92 yards, and also caught a 16-yard touchdown from John Brown. Allen fumbled once.

Allen was streaky in this game as usual, with some excellent throws and runs, but some bad misses and questionable decisions. Allen made a number of gaffes late in the game including throwing a bomb to the fullback and attempting a completely unnecessary lateral that missed its target. Allen still has some progression to do, but for fantasy purposes, will be a nice late round target next season thanks mostly to his mobility.

Josh Allen completed three of his five pass attempts for five yards in the Bills' Week 17 loss to the Jets.

Allen was used sparingly in the contest, which did not see the Bills playing for anything, given that they had already locked in the 5-seed in the AFC. Allen will be back under center next Saturday as the Bills take on the Texans in what is a good matchup for the passing game. Allen's mobility propelled him to a solid QB1 finish in fantasy this season, and he'll likely be a nice value next year as well.

Josh Allen completed 13-of-26 pass attempts for 208 yards and two touchdowns in the Bills' Week 16 loss to the Patriots. Allen rushed seven times for 43 yards.

Allen had a low-volume, but relatively impressive passing day against one of the league's elite pass defenses. Allen was just at 50% completions, but his deep balls buoyed his overall efficiency. Allen's rushing ability once again bolstered his fantasy line in a nice way. For those playing in Week 17, Allen has a nice matchup with the Jets.

Josh Allen completed 13-of-25 pass attempts for 139 yards, one touchdown, and one interception in the Bills' Week 15 win over the Steelers. Allen rushed seven times for 28 yards and a touchdown.

Allen was ineffective for a large part of this game, but once again managed to salvage a usable fantasy line with the rushing output, especially the rushing score. Allen now has nine rushing touchdowns on the season. Next week's matchup against the Patriots is as tough as it gets, so Allen is a risky option for Week 16.

Josh Allen completed 17-of-39 pass attempts for 146 yards, one touchdown, and one two-point conversion in the Bills' Week 14 loss to the Ravens. Allen also rushed twice for nine yards and fumbled once.

Allen's two worst games this season came against New England and Baltimore, the two strongest pass defenses he's faced, which shouldn't be a surprise. Allen is an erratic passer who has not yet shown that he can rise above tough matchups. This is bad news because Allen gets to face off with Pittsburgh next week, and then New England in Week 16, two of the best pass defenses in the league. Allen will be a highly risky fantasy option for the remainder of the fantasy playoffs.

Deposit $10 at a DFS partner site you have NOT played at and get a FREE 6 Month HOF Subscription!
Claim Offer
Who Should I Start?
Most Accurate Experts
for Josh Allen
Consensus Rankings
View All Rankings