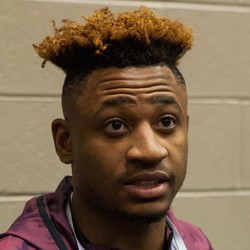 Daniel Popper of The Athletic writes that the Chargers are still very high on third-year running back Justin Jackson.

Popper reports the Chargers like the "one-two punch" of Austin Ekeler and Jackson, with Jackson taking on a reduced version of "the Melvin Gordon role". Ekeler is quite clearly still the running back to own here for fantasy purposes, but Jackson figures to eat into his workload somewhat. If Jackson sees some goal-line touches as well than he could wind up with FLEX appeal at times next season.

Justin Jackson rushed five times for 15 yards and caught both of his targets for two yards in the Chargers' 39-10 loss to the Vikings Sunday.

Jackson is the third option in the backfield for the Chargers and is not worth considering for the fantasy finals.

More details on this news will be available soon.

Check back shortly for the fantasy impact.

Justin Jackson (calf) is listed as doubtful for Sunday's contest against the Steelers.

Jackson is trending towards missing Sunday's game against the Steelers, but has a slim shot of suiting up. He has missed the previous two games due to a strained calf. Troymaine Pope will step up as Los Angeles' No. 3 running back if Jackson is unable to go.

Brad Camara34 weeks ago
Justin Jackson out as expected Week 5

Justin Jackson (calf) is inactive for the Chargers' Week 5 matchup against the Broncos.

This comes at no surprise, as Jackson has been doubtful all week with his calf injury. Melvin Gordon is expected to take on a full workload Sunday, and will likely split carries with Austin Ekeler with Jackson out.