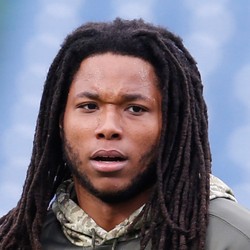 Kelvin Benjamin is inactive for the Chiefs' Week 14 game against the Ravens.

Benjamin was only recently signed so hasn't had enough time to get up to speed on the offense. Expect Chris Conley to continue to act as the third-best receiving option for the Chiefs with Sammy Watkins also out.

This isn't a surprise given his hefty contract. At this point, it would make sense for some WR-needy team to kick the tires on Benjamin at a reduced rate, but it's not clear who or when that will be. At this point, Benjamin isn't likely to carry fantasy relevance in 2018, but he could be someone to stash in keeper and dynasty leagues given his track record.

Blaine Blontz1 year ago
Kelvin Benjamin released by the Bills

While some might be surprised by Benjamin's release, don't be. Since joining the Bills via trade last season, Benjamin has been a disappointment. Failing to take advantage of a new beginning, Benjamin has only accumulated a 48/692/3 stat line through 12 games in 2018 and pacing for career-low numbers across the board. Moreover, his numbers have steadily regressed in each year. Benjamin is subject to waivers. Zay Jones, who has scored three touchdowns in as many games, along with Deonte Thompson, are the top wideouts on the Bills to close out 2018.

Kelvin Benjamin caught two of his four targets for 20 yards in the Bills' Week 13 loss to the Dolphins.

Another week, another disappointing output for Benjamin, who has fallen off the face of the fantasy football earth. Benjamin belongs on the waiver wire.

Kelvin Benjamin caught one of his two targets for 32 yards in the Bills' Week 12 win over the Jaguars.

As has been the case for a while now, Benjamin's target volume is spotty and unreliable, to put it nicely. Cut bait if you have still been holding out hope.

Deposit $10 at a DFS partner site you have NOT played at and get a FREE 6 Month HOF Subscription!
Claim Offer
Most Accurate Experts
for Kelvin Benjamin
Consensus Rankings
View All Rankings