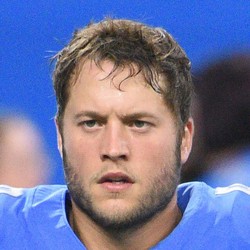 According to Lions GM Bob Quinn, franchise QB Matthew Stafford is “cleared medically” and would be a full-participant in any offseason workouts they would have right now.

Before Stafford had to be sidelined for the last eight games in 2019 due to a back injury, he was lighting the league on fire. He threw for almost 2,500 yards, 19 TDs and only five interceptions. He was on pace to have a career-year, similar to 2011 when he threw for over 5,000 yards and 41 TDs. The Lions seem comfortable with Stafford moving forward, and currently own the 3rd overall pick in the NFL Draft. With three QBs set to go in the top-10 (Joe Burrow, Justin Herbert, Tua Tagovailoa), Quinn has confirmed Detroit is talking to teams about a trade for the 3rd overall pick. He’s likely comfortable doing so knowing he’s got a healthy Stafford running his offense moving forward.

Adam Koffler11 weeks ago
Matthew Stafford wants to be traded?

Michael Silver is reporting that, according to some general managers and coaches around the league, Matthew Stafford wants the Lions to trade him.

There have been trade rumors involving Stafford lately, and the expectation was that the team was interested in exploring options as they continue their rebuild. However, now it looks like Stafford could be the one asking out of Detroit. The Lions are no longer slinging the ball around like they were, which has limited Stafford's ceiling over the years. Still, he has decent weapons to work with and will again be in the QB1 conversation if he remains in Detroit. He's currently the QB13 in our expert consensus rankings.

Lions general manager Bob Quinn told reporters that quarterback Matthew Stafford has already resumed working out and should be "full-go" in time for the team's offseason program. Stafford landed on IR in 2019 due to back and hip injuries.

Stafford was able to produce before succumbing to injuries in 2019. He should have a nice stable of pass-catchers available to him in Kenny Golladay, Marvin Jones, the recently re-signed Danny Amendola, and tight end T.J. Hockenson. As such, Stafford should again enter the season as a borderline QB1 in 1QB redraft leagues. He's currently the QB13 in our expert consensus rankings.

Matthew Stafford (hip/back) was placed on the injured reserve Tuesday.

Stafford has missed the last six games due to multiple fractures in his back. He was placed on the injured reserve Tuesday, officially ending his season. Stafford finished 2019 with 2,499 yards, 19 touchdowns and five interceptions across eight games. The Lions will look to David Blough and Kyle Sloter as their quarterbacks for the remainder of the season.

Matthew Stafford will not play on Sunday when the Lions face off against Washington. Stafford continues to rehab his fractured back.

Stafford being out comes at no surprise, which means that Jeff Driskel will lead the Lions' offense in Washington. Remove Stafford from your lineups if you were holding out to play him. The veteran quarterback remains week-to-week with his back fractures.

Garett Thomas32 weeks ago
Who Should I Draft?
Most Accurate Experts
for Matthew Stafford
Do Not Sell
Are you looking to contact Customer Support about a subscription or account related question?
Yes
No, I'm a California resident looking for the California Consumer Privacy Act form