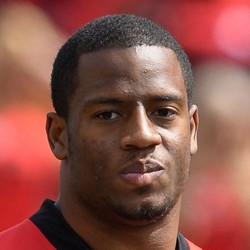 Cleveland Browns running back Nick Chubb carried the ball 13 times for 41 yards and added a one-yard catch in a 33-23 loss to the Bengals in Week 17.

Chubb is likely to finish as the NFL's rushing leader. He now has 18 total touchdowns in 32 career games. Although Kareem Hunt cut into his passing-game work this year, the second-year running back should be treated as a low-end RB1 in fantasy again in 2020.

Cleveland Browns running back Nick Chubb was held in check in a 31-15 loss to the Ravens in Week 16. Chubb gained just 45 yards on 15 carries and was unable to haul in his lone target.

Chubb couldn't find much room to run, with a long carry going for just 12 yards. He has seen his work in the passing game cut into by Kareem Hunt, which has limited his fantasy ceiling. Chubb does draw a plus matchup against the Bengals in Week 17.

Cleveland Browns running back Nick Chubb had an excellent game in a 38-24 loss to the Cardinals in Week 15. Chubb carried the ball 17 times for 127 yards and a touchdown in the loss.

Chubb also added three catches for 21 yards. The second-year running back has been a quality fantasy producer all season and should remain in starting lineups for Week 16's matchup against a tough Ravens defense. Chubb ripped Baltimore for three touchdowns when these two teams met in Week 4.

Cleveland Browns running back Nick Chubb carried the ball 15 times for 106 yards in a 27-19 win over the Bengals in Week 14.

Chubb also added an 11-yard reception. He picked up most of his yardage on a 57-yard run in the third quarter but then watched as Kareem Hunt capped off the drive with a three-yard score. The second-year back will be a solid RB1 in Week 15 against the Cardinals.

Matthew Terelle26 weeks ago
Nick Chubb bottled up in loss

Cleveland Browns running back Nick Chubb struggled in a 20-13 loss to the Steelers in Week 13. Chubb totaled just 58 yards on 16 carries while tacking on a 21-yard reception.

Chubb couldn't find much room to operate against a tough Pittsburgh rush defense. He draws a plus matchup against the Bengals in Week 14, keeping him in the RB1 conversation.

Deposit $10 at a DFS partner site you have NOT played at and get a FREE 6 Month HOF Subscription!
Claim Offer
Who Should I Draft?
Most Accurate Experts
for Nick Chubb
Consensus Rankings
View All Rankings
Do Not Sell
Are you looking to contact Customer Support about a subscription or account related question?
Yes
No, I'm a California resident looking for the California Consumer Privacy Act form