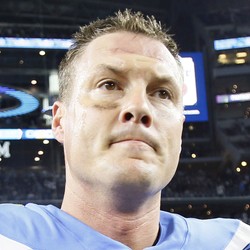 Philip Rivers and the Chargers have agreed to part ways, and Rivers will become a free agent in 2020.

The writing was on the wall for the aging veteran, who led his team to a disappointing 5-11 record in 2019. Over the course of his 16-year tenure with the Chargers, Rivers earned eight Pro-Bowl selections. He compiled plenty of statistical accomplishments, passing for 59,271 yards and 397 touchdowns — both sixth-most in NFL history. He should draw interest from at least a few quarterback-needy teams, if not as a starter, then as a top-tier backup and locker-room leader.

Zachary Hanshew1 week ago
Philip Rivers’ career as a Charger likely over, set to become a free agent

The Chargers have “moved on Philip Rivers,” per Jay Glazer of Fox Sports. He is set to become a free agent in March.

Rivers is coming off a (5-11) record as a starter last season, where his 23 touchdowns thrown were the fewest since 2007. He also threw 20 interceptions for the third time in his career. Rivers recently moved his family from California to Florida, hinting he might sign with an East Coast team. The Chargers have Tyrod Taylor signed for 2020, and could be looking at other options to further bolster their quarterback situation. Rivers will become a free agent in March, and will look to latch onto another team.

Philip Rivers completed 31-of-46 passes for 281 yards with two touchdowns and two interceptions in the Chargers' 31-21 loss to the Chiefs Sunday. He added one rush for five yards.

Rivers finished a turnover-plagued 2019 with two more interceptions Sunday. He heads into the offseason with questions surrounding his playing status for next season.

Rivers put up decent yardage but failed to throw for any scores in Sunday's loss. The formerly trustworthy veteran has faded from fantasy relevance this season.

Philip Rivers completed 28-of-39 passes for 307 yards with one touchdown and three interceptions in the Chargers' 39-10 loss to the Vikings Sunday. He also lost one fumble.

Rivers had four turnovers in a blowout loss Sunday. Given his recent struggles, owners should stay away for the fantasy finals.

Deposit $10 at a DFS partner site you have NOT played at and get a FREE 6 Month HOF Subscription!
Claim Offer
Who Should I Start?
Most Accurate Experts
for Philip Rivers
Consensus Rankings
View All Rankings