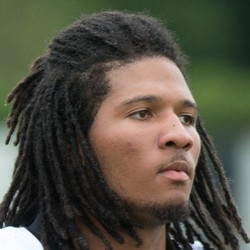 Jones left Thursday night’s victory over the Giants after injuring his hamstring in the first half. He was unable to return. Jones had one tackle before the early exit. He was replaced by Avonte Maddox in the slot, with Rasul Douglas at safety. The extra three days of rest will surely help, but his Week 7 outlook is looking dim at this time.

Eagles cornerback Sidney Jones left Thursday night’s victory in the first half with a hamstring injury. He did not return.

Jones had one tackle before the early exit. He was replaced by Avonte Maddox in the slot, with Rasul Douglas at safety. The severity of the injury and his status for Week 7 is not yet known. The extra three days rest will surely help. The Panthers are up next.

Cornerback Sidney Jones gave Eagles fans quite the scare when he remained down, holding his left foot, after a second-quarter tackle in Philadelphia’s preseason opener Thursday. He told reporters after the game he suffered a minor ankle injury but is okay.

Jones was injured when he was run into by linebacker Nate Gerry as the two assisted on a tackle. After several minutes on the examination table, Jones tested out the foot and had his ankle re-taped. He never returned to the field, but did appear able. Jones took all of his snaps in the slot, where he’s been getting most of his work in training camp.

Eagles cornerback Sidney Jones is expected to be healthy and ready to go for the start of training camp.

Jones still has to pass a conditioning test and a physical, but it is expected he will be on the field when the Eagles open camp on Thursday. Because of an achilles injury suffered prior to the 2017 draft, the second-round pick didn’t see the field as a rookie until week 17 and was inactive throughout the team’s Super Bowl run. He also missed the last three weeks of spring workouts with what was called “lower body soreness,” unrelated to the achilles injury. Now that he has returned to full health, Jones is the favorite to win the competition for the starting slot corner job.

Philadelphia second-round pick and cornerback Sidney Jones is no longer wearing a walking boot as he continues to rehab the torn Achilles he suffered during his University of Washington pro day. Washington operates on the quarter system, meaning Jones was not able to practice with the Eagles until the Spring quarter ended.

Jones almost certainly will not be ready for the beginning of the season, and there are some who think he may not play at all in 2017. The Eagles, for their part, say they are preparing Jones as if he will be ready to play this season. They could certainly use him, as their secondary is currently projected to be one of the weakest units on the team.