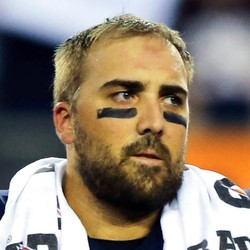 Tom Savage completed five of nine pass attempts for 33 yards, no TDs, and no INTs in the Lions’ loss to the Browns in Thursday’s preseason finale.

Savage was largely ineffective once again, and Detroit may opt for a more dynamic QB in Josh Johnson to backup Matthew Stafford.

Zachary Hanshew45 weeks ago
Tom Savage does little in loss

Tom Savage completed two of three passes for 40 yards, no TDs and no INTs in the Lions' 31-3 loss to the Patriots in Thursday's preseason opener.

Savage played it safe in a relief effort, throwing just three passes and completing two of them for 40 yards. The former Texans QB has a 2-7 record in nine career starts, and he's looking to latch on with the Lions as a backup.

The official Twitter account of the Cincinnati Bengals is reporting the team has claimed QB Tom Savage on waivers from the 49ers.

In the wake of placing Andy Dalton on IR earlier in the day with a thumb injury, the Bengals claimed Savage from the 49ers in a corresponding move. Savage has yet to make an appearance in an NFL game in 2018. He will provide Cincinnati depth at QB behind Jeff Driskel.

Savage will act as the emergency quarterback behind C.J. Beathard and Nick Mullens. There's almost no path to playing time for Savage, so this stay in San Francisco could also be a short one

Tom Savage had to leave the game early against the San Francisco 49ers, before he left the game he completed 6 passes for 63 yards from 12 attempts.

Given the severity of the injury, Savage is a doubt for Week 15.

Richard King3 years ago
Most Accurate Experts
for Quarterbacks
Do Not Sell
Are you looking to contact Customer Support about a subscription or account related question?
Yes
No, I'm a California resident looking for the California Consumer Privacy Act form