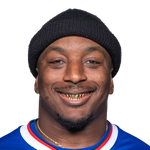 We have one more week of David Johnson being held out on injured reserve, which means another week of Duke Johnson as the primary ball carrier for the Texans. Unfortunately, that hasn't amounted to much of anything. In the two games as the workhorse, Johnson has totaled just 69 yards on 24 carries, and has chipped in with just three catches for 20 yards. We're finding out why Johnson was never given a workhorse role with the Browns or Texans. Is the matchup too juicy to pass up this week? Against the Lions, running backs have outscored quarterbacks by a league-high 15.39 fantasy points. The Lions have allowed 83.4 PPR points per game to skill-position players (2nd-most), and 41.0 percent of that has gone to the running back position, which is the second-highest percentage in the NFL. They've allowed more rushing touchdowns (14) and receiving touchdowns (5) to running backs than any other team in the league. That all amounts to a league-leading 34.2 PPR points per game allowed to running backs. The Lions are bad across the board, as they've allowed the second-most points on the ground to running backs and have also allowed the third-most points through the air to them. There is no team in the league who's seen more weighted opportunity per game to running backs than the Lions. Running backs have averaged a massive 31.4 touches per game against them, so Johnson should be in line for plenty of touches in this game. He should be plugged in as an RB2 once again this week with a shot to finish top-12 against this porous defense.