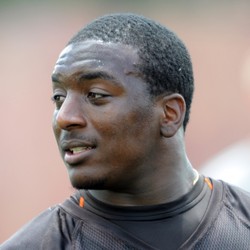 Chances are, you won't need to use an RB or WR from a late-round pick in the first week of the season, but if injuries, suspensions or holdouts strike, as they often do, Johnson could come in handy. The Chiefs were one of the worst teams against fantasy running backs last year, and as you may have guessed, they were torn up through the air with teams trying to play catch-up. Duke doesn't have much seasonal upside but is a steady RB4/RB5 who should benefit from that exact game-script in Week 1.

Duke Johnson catches five passes out of the backfield

Duke Johnson gained 11 yards on his lone rushing attempt while making five catches for 23 yards on eight targets as a receiver Sunday in Houston’s Divisional Round loss to Kansas City by a 51-31 score.

Johnson was needed in the second half as the Texans turned to a pass-heavy offense as they fell behind the Chiefs in the second quarter. The veteran running back seems to have found a role on passing downs but may see more action in 2020 if Carlos Hyde does not return.

Deposit $10 at a DFS partner site you have NOT played at and get a FREE 6 Month HOF Subscription!
Claim Offer
Who Should I Draft?
Most Accurate Experts
for Duke Johnson
Consensus Rankings
View All Rankings
Do Not Sell
Are you looking to contact Customer Support about a subscription or account related question?
Yes
No, I'm a California resident looking for the California Consumer Privacy Act form