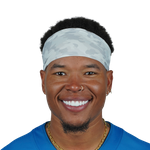 Just when you're ready to give up on Jones, he pops back up and reminds you that he's the No. 1 wide receiver on the Lions. He's averaged a robust 10.0 targets per game over the last four weeks, which ranks as the sixth-most among wide receivers. He's been the No. 9 wide receiver in PPR formats during that time, too. Jones has actually scored 10.8-plus PPR points in six of his last seven games, so this goes beyond no Golladay. Any wide receiver who's averaging 10.0 targets per game needs to be in lineups, even if it's a not-so-great matchup. The Packers would qualify as one of those, as they've allowed the sixth-fewest fantasy points per game to them. The 1.72 PPR points per target they've allowed is the 10th-lowest mark in the league, but that's where we need to be reminded about what volume means to wide receivers. Even if Jones were the average NFL wide receiver against them and got the same target share he's received over the last four games, he'd finish with 17.2 PPR points, which would be a top-20 performance. He's probably going to draw Jaire Alexander in coverage, who's allowed 26-of-49 passing for 273 yards and two touchdowns. That's a bit worse, as his coverage has amounted to just 1.33 PPR points per target, but 13.3 PPR points would still be a mid-tier WR3 performance. I just wanted to share why we're constantly harping on volume. Jones was struggling out of the gate this year and though he only saw six targets without Golladay in the lineup, he finished with 4/23/1 in the Week 2 matchup against the Lions. It's not the greatest matchup with Alexander, but he's a high-end WR3.