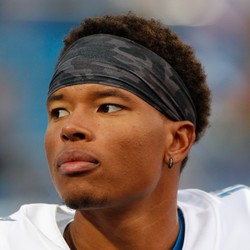 The Detroit Lions have placed wide receiver Marvin Jones on IR with an ankle injury that will end his season.

Jones will finish the 2019 regular season with 62 grabs for 779 yards and nine scores (tied for second-most). It is the second straight year where he has had his season end on the IR (2018 with a knee issue). Jones will be 30 this offseason and has one year remaining on his contract for $6.5 million.

Deposit $10 at a DFS partner site you have NOT played at and get a FREE 6 Month HOF Subscription!
Claim Offer
Most Accurate Experts
for Marvin Jones
Consensus Rankings
View All Rankings