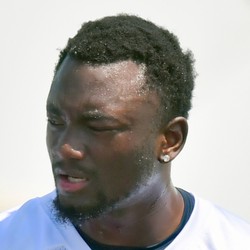 Although the Titans had a historically efficient 2019 with a surprising amount of passing from Ryan Tannehill, Corey Davis still went oddly downhill. With A.J. Brown firmly established as lead receiver and Derrick Henry the engine of this offence, it's very hard to see Davis being a truly useful fantasy receiver. While he's available at the end of most drafts, it's important to realise he's not offering you much upside.

Ben Wasley - The Fantasy First Down1 week ago

Remember when everyone left DeVante Parker for dead? It feels that way with Davis, who is going into the final year of his rookie deal. Unfortunately, he's not on a team that's going to throw the ball 600-plus times like Parker's team did last year. Still, there's an opportunity for increased efficiency with Ryan Tannehill under center and A.J. Brown drawing the opponent's top cornerback. We have watched Davis' yards per target increase each year (5.8, 8.0, 8.7), so you shouldn't abandon all hope. He's someone to stash at the end of your bench.

Coming off his best yards per catch season and best catch % season you'd think all is well with Corey Davis. his 69 targets and being the clear second fiddle to A.J. Brown say otherwise.

Call me crazy, but I have not given up hope that he can make it at the next level. Sure the chemistry was instant with Tannehill and Brown, but Davis has the pedigree, size and skills to take the next step.

Lukas Kacer - The Fantasy Stock Exchange14 weeks ago
Who Should I Draft?
Most Accurate Experts
for Corey Davis
Do Not Sell
Are you looking to contact Customer Support about a subscription or account related question?
Yes
No, I'm a California resident looking for the California Consumer Privacy Act form